WebExpo is central Europe's largest conference covering deep tech & practical topics for developers, designers, product managers, and marketers. They used Eventee for the third time and this year they accomplished the best results!

To be honest, we have a special relationship with WebExpo. Last few years we were not only the event app suppliers, but also the attendees, and we enjoyed every second. WebExpo is simply amazing! The atmosphere, all the inspirational people, the lineup and all the knowledge that we gained is incomparable with anything else we have experienced so far.

But back to the topic...

What were the expectations of the organizers about an event app?

WebExpo chose to use a Premium version of Eventee. Firstly, they uploaded the whole program and speakers through API (you can find your unique API token in section Settings in web administration). They used API also for synchronization of Favorites from their websites - they had the whole agenda at their websites in advance, and when the attendees chose some lectures and marked them as Favorites, WebExpo uploaded them into Eventee. That means these attendees had their custom schedule automatically in Eventee when they logged in.

Moreover, they activated Newsfeed and Networking and created information cards with all the useful information, such as restaurant recommendations, maps, feedback form, discounts for attendees, etc.

They used a ticket synchronization with Czech ticketing system SimpleTicket. SimpleTicket automatically imported all the ticket buyers into Eventee and when the event preparation was finished and the event went public, WebExpo sent to the attendees an email with an invitation to download and use Eventee, approximately one week before the event.

Immediately after that, the attendees started to network, so that on the day of the event, some of them already had some meetings scheduled. Some attendees had already their custom schedule prepared thanks to the API synchronization, and the ones that didn't, started picking particular lectures from 6-halls track and created their customized schedule, so they knew in advance when and where they have lectures and when they have breaks.

What was the outcome?

This is such an amazing number because the industry standard of using event apps is between 15-20%!

Thanks to all these data, the event organizer can properly evaluate the success of every single lecture!

Thanks to the fact that the organizers spread the event app among the attendees one week before, they gave the attendees a lot of time to network and chat with each other. And it's amazing because they could really create business contacts!

And all the connected people sent each other 962 messages!

This number is based on 1039 reviews! It basically shows the organizers a success of all the lectures together - and in this case, the success is visible!

63% of people customized their schedule

The number of people who created their schedule from the six-halls track through Favorite feature and thanks to that, they knew where and when they should be.

We think these results are awesome! And because we were there personally, we could chat with the attendees and ask them for their  feedback and opinion about Eventee.

These are the messages we received:

Translate: "Hello, great app! Especially networking. I am curious about the user base. It's awesome that you can rate speakers publicly and not only for event organizers."

Moreover, we asked the director of WebExpo, Šárka Štrossová, if she can evaluate the cooperation with us and describe the experience with Eventee in a few words: 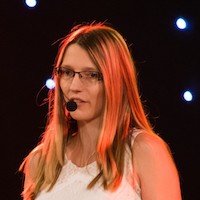 "We were super excited about Eventee this year! Our attendees had every information at one place - agenda, a map of the event, restaurant recommendation, discounts and promo codes and above all, they had all the time up-to-date information. It's nice that we could update them about changes in the agenda really quickly. And attendees loved networking feature that works similarly as Tinder."

Besides, we discussed the possible improvements with both attendees and organizers personally and we are very grateful for every single one who gave us feedback. Because thanks to all your feedback, we can improve what we are doing and move Eventee forward.

Lastly, we would love to thank you, WebExpo, for being such an awesome conference and thank you, Šárka, for choosing Eventee as a mobile app for your event. Hope to see you next year! ❤️

Do you want to transform your event and join our happy customers? Start a free trial at eventee.co!

Organize Virtual and In-person Events With a Simple Tool

This news from will definitely make your day better! A brand new payment process, enhanced projector mode and more!